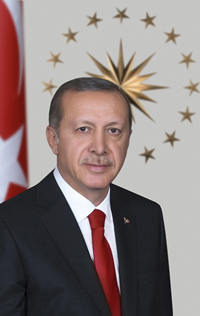 Today, we are celebrating the 94th anniversary of the Great Victory, which marked the resanctification of Anatolia as our homeland, together with our people and brothers in the Turkish Republic of Northern Cyprus in great pride and excitement.

I would like to congratulate wholeheartedly August 30 Victory Day of millions of our citizens who live in Turkey as well different countries around the world.

The torch of independence lighted in 1919 under difficult conditions and deprivations was crowned with the Battle of Commander-in-Chief on August 30 under the leadership of Ghazi Mustafa Kemal and his comrades.

August 30 is the most obvious proof of what a nation can venture and accomplish to save its independence and its dignity when confronted with the choice "EITHER INDEPENDENCE OR DEMISE".

On August 30, 1922, the Turkish nation announced to the whole world that it would never bow to oppression and forego its independence in any way.

Today, we still posses the same will- power proven 94 years ago in Dumlupınar with the epic struggle and the blood of our holy fallen. We are exerting our utmost efforts so that our Republic stands forever, and raise our country above the contemporary civilizations in economic, social and political aspects.

Pride projects of our country, such as Osman Gazi Bridge and Yavuz Sultan Selim Bridge, which have been completed this year, are the most concrete manifestations of our determination to carry on this struggle.

Our efforts will continue in unity, togetherness and solidarity and defeat the gangs of treachery and overcome the obstructions and vicious attacks of terrorist organizations who desire to impede the auspicious progress of our country.

Victory of August 30 should be a lesson particularly today for the terrorist organizations and evils targeting the unity, welfare and existence of our country in these lands.

The stance displayed by the Turkish people during the bloody 15 July coup attempt is a vivid display of the vitality of the “Great Offensive” spirit. At that night, all Turkey along with Turkish, Kurdish, Laz, Circassian, Sunnites and Alawites united their forces around our common values and defeated the members of FETÖ terrorist organization, who were disguised themselves in military uniforms.

The epic spirit displayed in squares and streets of our cities on 15 July rose to a new height with the historical Yenikapı Meeting, in which 5 million people participated on 7 August 2016. Turkey is exposed also to the attacks of the terrorist organizations apart from FETO, such a DAESH and PKK targeting civilians, security officials, children and innocent people during this period.

The single aim of all these terrorist organizations under different names but directed by the same centre is to damage the “New Great Offensive Spirit” which manifested itself on 15 July and 7 August, and bring this country into its knees.

The Jarablus operation, initiated on 24 August in cooperation with the International Coalition, is a reflection of our resoluteness and will.

Our operations will continue until the terrorist organizationssuch as DAESH, PKK and its Syrian affiliate YPG cease to become a threat to our citizens.

Our greatestsource of confidence isthe solidarity displayed by the Turkish people on the night of 15 July and thereafter as well as the support of our friends.

On this occasion, I would like to remember gratefully Mustafa Kemal, the founder of the Republic of Turkey and the Commander in Chief of the Great Offensive as well as his comrades. I wish God’s mercy upon all our fallen and veterans.

Happy 30 August Victory Day to all.